Blood supplies have been critical in many parts of the country and natural disasters such as Hurricane/Tropical Storm Harvey tax blood banks even more.

What makes NBDW so unique is that both Republican and Democratic governors are uniting and coming together for a common cause.

One pint of blood has the potential to save three lives.  Imagine what the whole country can do!

According to the American Red Cross, 36,000 units of blood are needed in the U.S. every day.

38% of the U.S. population is eligible to donate blood but less than 10% actually do.

Donating blood is easy and takes less than one hour.  Many places of work can hold blood drives so employees don’t have to take off work (plus you get yummy cookies). 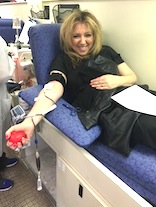 Inconsistent donation patterns during the year result in unpredictable and reliable blood supply numbers, hence donation is requested year round.

The summer and holiday season appear to be the “dryest” in terms of donations.  States and regions frequently need to ship blood to areas who are in need.

Blood Bank of Delmarva drives can be found here.